Please click on the links below to see the reports from the meetings:

Here are the summaries for the Traffic counts in the Church layby during June 2018 as presented at the July 2018 Parish Council meeting.

As with the December count, fewer vehicles (6%) are measured travelling at speeds above 35mph in comparison with the Rectory Layby (10%).

There were 17646 additional vehicles measured 4th June – 2nd July in comparison with the 84191 vehicles measured in December.  The number of vehicles recorded (101837) was similar to that recorded in the Rectory Layby during April (103213). The A10 closure at the Hardwick roundabout, does not appear to have increased the volume of traffic during June, but in previous months there have been closures on the A47 resulting in traffic being diverted via the A1122.

Please click on the link below for statistical information.

Please click on the link below to see the report from the May 2018 Parish Council meeting on the data collected from the SAM2 sign:

Please click on the links below to see the reports produced by Cllr. Ponder:

Please click here to see the report from 17th September 2019

Please click here to see the report from 26th November 2018

There is also information on how to contact the Watlington Safer Neighbourhoods Team. Please see the details below: 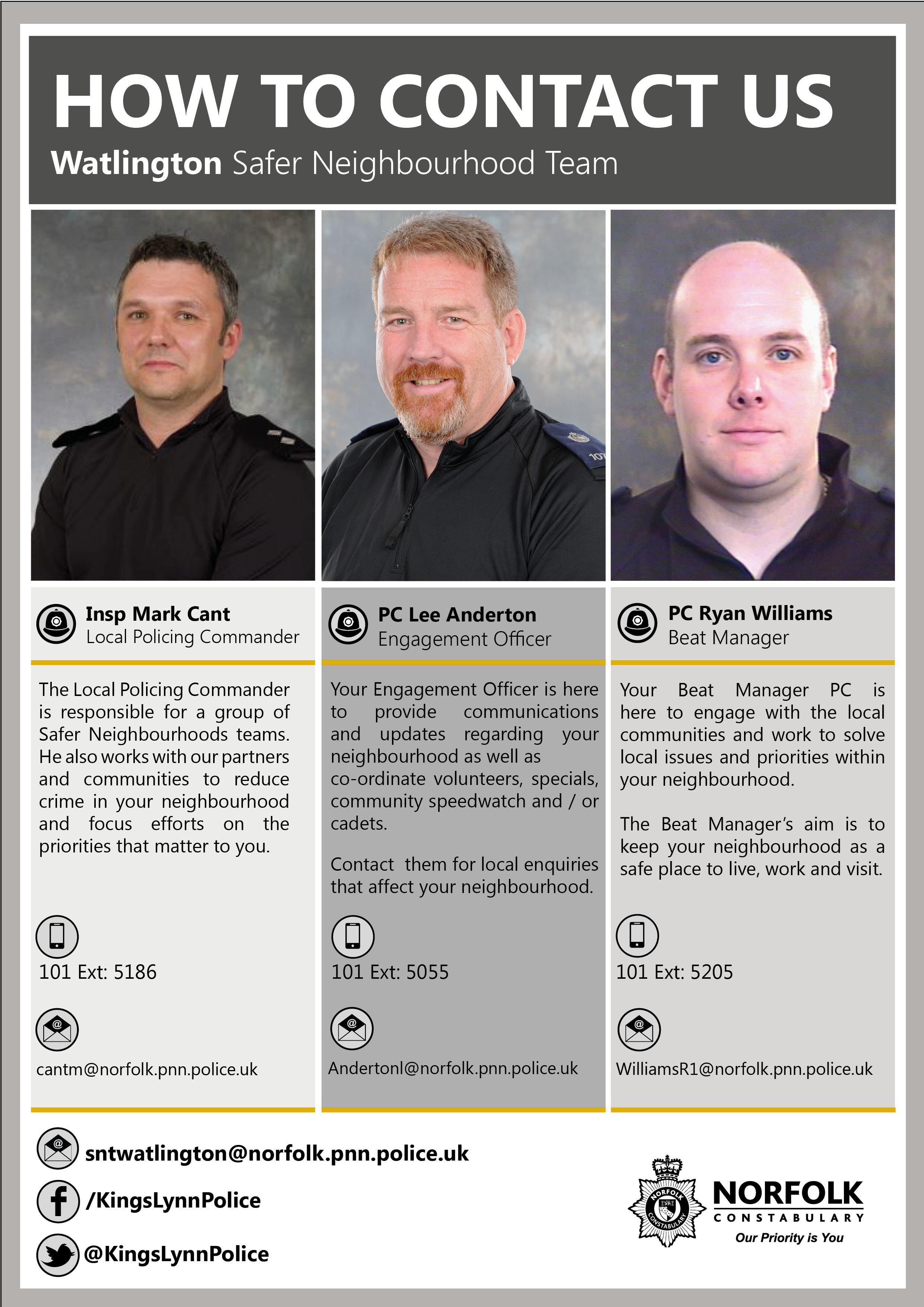 Please click on the link below to see the report given from the Police Engagement Meeting:

The Commander welcomed all in attendance and put the on going work into context.

He concluded by saying that the new aircraft (contrary to The Daily Mail) will not be noisier.

Two of his officers continued the talk.

The coach tour showed the extent of the work being undertaken and the progress is impressive.

There will be an open event at the Sandringham Centre to inform local villages when the short take off runway is due to be used. Parish Councils will be notified of the date.

During the time that the sign was placed in the Rectory layby there were two occasions where there were temporary traffic lights [Anglian Water], the first being to the West of the sign and the second to the East.   This resulted in some cars being recorded as travelling at less than 10 mph because of the queuing traffic.

Additionally, the period that the SAM2 was in the church layby could be considered as atypical because it included the Christmas holiday period when many people were not travelling to work and school.

The volume of traffic passing though the village throughout the day,  shows that there are peak times associated with the morning and evening rush hours when more vehicles are reported .   From the West the peak traffic flow is between 7 and 9 am,  when people are travelling to work and from the East, the peak traffic flow is between 5 and 7 pm.  There were fewer vehicles reported at the weekends.   Traffic volume is also affected by closure of other major roads such as the A47, which may explain why 600 cars passed through between 5 and 6 pm on a Saturday afternoon in October.

The majority of cars travelling through the village are therefore travelling at speeds of 34 mph or less, although at least 5% of cars are speeding.

Alarmingly, the maximum speed recorded at  both sites was 95 – < 99 mph,  and whilst it might be assumed that speeding in excess of 35 mph occurs mostly at night,  the summary tables showing the times at which speeders were recorded demonstrates that the majority of speeding occurred during the day.   Emergency vehicles – paramedics,  police cars often whizz through the village,  and it is possible that they are travelling in excess of 55 mph.

Please click on the links below to see further information on the data recorded: